I’m Not Just Another Therapy

I was born with the most amazing teacher that never said a word. I could tell with a look in his eyes and his body language and gesture what he was thinking, what he wanted, and he was being mischievous. My teacher was my older brother and he has autism.

Communicating without language was normal to me growing up. I knew that I would be working with people with disabilities from a very young age. Part of being autistic is you can’t express emotions in words. So this something that was never modeled. My brother could not say he was mad but demonstrated that with behaviors such as shutting down, bolting, or in severe cases breaking a window. When I was 12 and my brother was 16, out of the blue my parents split up and my brother was sent to live in a group home.

In order to cope, I turned to drugs and alcohol. Sometimes I act out to get attention. My favorite example is when I decided to pierce my tongue because my father was a dentist. Somehow, I was able to pull it together to get through college. I was done with the drugs and moderated the alcohol. In 2009, my accountant said to go take a course for a tax right off. I chose Yoga for The Special Child.

They taught that this is not just another therapy. In order for this method to be as affective as it is meant that I would have to work on myself in order to help my clients. When I heard that, I wanted to run. That was not what I signed up for. I felt like I was in a foreign country and did not know the language. I stuck with it and felt amazing by the end. So amazing, that I was able to get off some of the prescription medications I was taking.

I began seeing very quickly this method was more effective than traditional occupational therapy. Many times, the results were surprising. For example, I had a 9-year-old with Rett’s Syndrome. This is a genetic disorder that causes children to lose developmental skills over time that they typically are not regained. Through yoga, she was able to regain skills that were lost. Rett’s syndrome has a hand movement pattern and in this child’s case her hands were always in her face. The first time she could see down the hall because her hands were relaxed she stopped at every bulletin board and just stared like she had never been able to see them before. It was truly amazing to watch.

Another time, I worked with a group of boys that had severe behavior disorders. Most of their school day was spent in time out. The 30 minutes they were in my therapy group they remained out of time out. I had this same group for 2 years. My supervisor came to watch as part of my annual review and she was in tears by the end of the session. 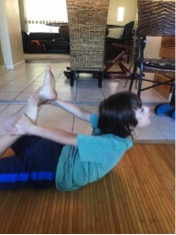 Right now I work an adult with cerebral palsy. Usually the muscles in his body are always moving and he is not able to remain still. Over time using yoga with him his body was able to be still. The first time this happened it reminded me of the way my brother communicated through eye gaze. I could see him smiling even though he was afraid to smile in fear or firing off all his other muscles. 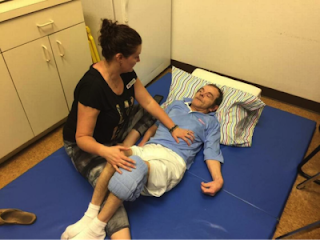 What’s significant is that, I am using yoga in the physical rehab setting and seeing results. Patients improve faster. The success stories go on and on.

It so fulfilling for me other share complementary options to traditional therapy like yoga and make it accessible for people with disabilities. Sometimes, in order to help these people get outside the box they live in, we have to think outside the box ourselves. 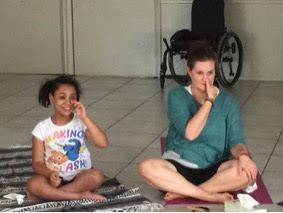 ° DONATE here to help us bring yoga to people who don’t have access or have been underserved, such as people with disabilities, chronic illnesses, children with special needs, and anyone who doesn’t feel comfortable in a regular yoga class.
Posted by Nina Zolotow at 12:49 PM