4 Ways to Change the Orientation of a Yoga Pose 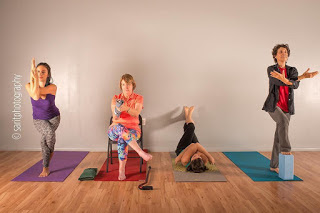 One of my neighbors told me that her problem with yoga was that she couldn’t do any poses lying down because she always felt nauseated when she was lying down. And when she consulted her doctor about it, her doctor told her just not to do them. I said to her, “You don’t need to let that stop you! There are actually multiple ways you can do any yoga pose, so even if you can’t lie down, you could do a given pose standing up instead, for example.” This reminded me of an important basic principle regarding making a pose accessible: change the orientation of the pose! (I introduced this concept in my post 6 Ways to Customize a Yoga Pose.) If I continue with my cooking metaphor, this is kind of like the time I took my children’s favorite soup recipe, Risi e Bisi (rice and pea), and turned it into a rice and pea salad because it was summer. They liked it!

Yoga poses are classically divided into four groups: standing poses, seated poses, supine poses (on your back, same as the Sanskrit word “supta”) and prone poses (on your belly). But for some, like my neighbor, all the poses in one of those groups aren’t accessible because that mode of practicing isn’t available to them. For example, maybe you can’t stand up at all due to illness, injury, or disability so you can’t do the classic versions of standing poses. Or maybe you can’t get down to and up from the floor so you can’t do the classic versions of seated, supine, and prone poses. Or maybe you need to do all your poses seated in a chair.

So if the classic version of a pose is not accessible to you because you can’t practice in that mode, try changing the orientation of the pose by practicing the basic shape of the pose in one of the modes that are accessible to you. In my neighbor’s case, for example, she could do a pose we do lying down, Supta Padangusthasana (Supine Hand to Big Toe pose aka Reclined Leg Stretch), standing up instead by practicing Utthita Hasta Padangusthasana (Extended Hand to Toe pose aka Standing Leg Stretch) with the lifted leg supported by a chair or something higher, such as a countertop. For those in the opposite situation, you would do Supta Padangusthasana lying down or seated in a chair instead of standing up in Utthita Hasta Padangusthasana.

Sometimes, as in the case of Padangusthasana, a version of a given pose already exists in more than one orientation (if there are two poses with the same name but one begins with “supta” that gives you a clue). But when there isn’t, you can just go ahead and make up a new variation. For example, for Cobra pose, which is normally done prone on the floor, someone (wish I knew who!) created a really nice variation that you do standing with your hands on the wall. 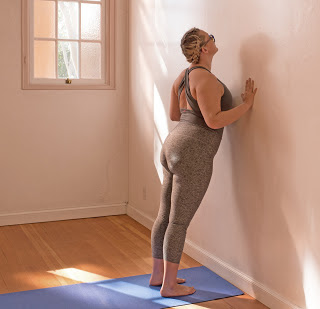 Once you start thinking along these lines, you’ll find a way to do almost any pose. Using this technique will not only give you more poses to practice at home on your own but when you’re in class it will allow you to figure out what to do on your own if your teacher is busy with something else and can’t help you. When I had a frozen shoulder, I used this technique in class all the time.

Now let’s take a closer look at four different ways you can change the orientation of a pose.

You can take the shape of many standing poses lying with your back on the floor with your feet on the wall, as if the wall was the floor and the floor was a wall. If you can’t get up and down from the floor, you could use a yoga platform, a dining room table, a sturdy coffee table, or even a firm bed as your floor. For example, here is Tree pose on the floor: 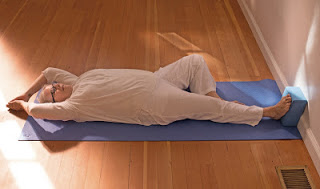 When you do the standing pose lying on the floor, rather than just resting against the floor in the shape of the pose, activate the same muscles that you would as if you were standing, so you’re actively doing the pose. For example, in Tree pose, firm your “standing” foot into the wall as you press the foot of your bent leg toward your thigh and press your inner thigh toward the foot. Reach your arms overhead and activate them, as if you were reaching them up toward the ceiling.

You can even do Handstand by lying on your back with your hands on the floor! Keep the image of the classic pose in your mind as you activate your entire body.

2. Seated on a Chair

You can generally take the shape of any standing or seated pose with either part or all of your body when you are seated on a chair. If you can move your legs, your legs can take the same shape they would if you were standing without putting weight on them. Although though your pelvis is supported by the chair, you will still be working against gravity to hold yourself up so a chair version of a standing pose can be surprisingly physically demanding (I have tried them!). Here are some examples: 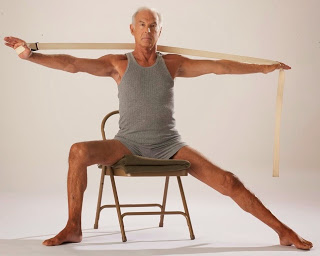 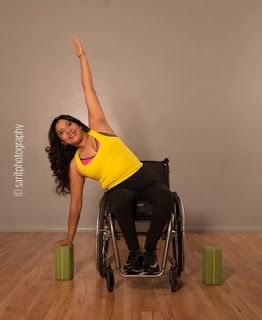 For those who can’t do supine or prone poses on the floor, you can often use two chairs and a lot of props to get into a close approximation of the pose. 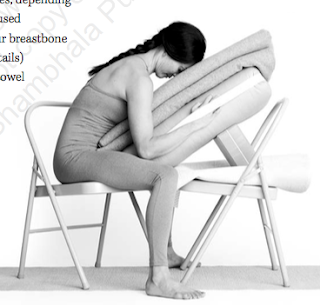 These days I’m encouraging everyone who can get up and down to the floor even with some help from a prop and/or stand up even with support to try to do some of your poses without sitting on a chair. Even if it’s very challenging for you, I think it’s worth your effort to maintain the agility and balance you do have by continuing to work on both these skills. So if they are at all possible, consider doing some floor and standing poses as well as chair poses. This photo shows using a chair while standing in Tree pose to help with balance and strength. 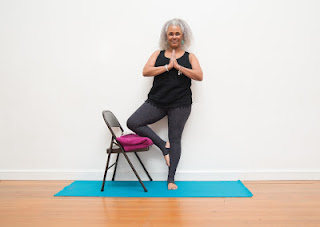 If you think of the wall as the floor, there are many prone poses, such as Cobra pose, that you can do standing with part of your body against the wall. 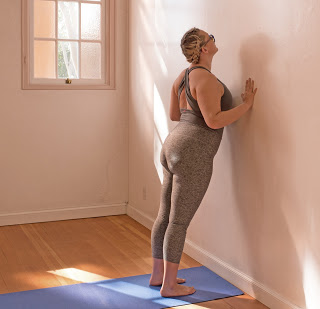 For example, I can see doing Locust pose with your hip points against a wall and arms lifted behind you or Plank pose with either hands or forearms on the wall. In his book Accessible Yoga, Jivana has a wall version of the entire Sun Salutation!

One advantage of standing at the wall over lying on the floor is that there is less weight on your hands, so these variations are very good for those with problems in the wrists or hands. Half Downward-Facing Dog pose at the wall is the classic example of this: 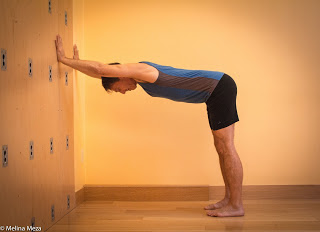 The wall version of Side Plank pose is another example. 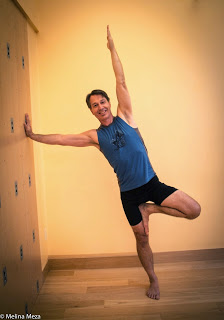 And because your orientation to gravity is different—you no longer have to lift yourself up away from the ground—these versions are less physically demanding so they're good for those who are weak or tired.

I can even imagine some supine poses against the wall, such as a passive backbend with a prop behind your shoulder blades and arms reaching up toward the ceiling or a wall version of Standing Leg Stretch.

Obviously relaxing reclined poses are not going to be relaxing if you do them standing up, so for restorative supine or prone poses, I would recommend using two chairs and a lot of props instead as mentioned above. Even better, you could use a yoga platform, a dining room table, a sturdy coffee table, or even a firm bed as your floor.

4. Upside-Down vs. Right-Side Up

For those who cannot go upside down into a full inversion, if your condition allows it, you may be able to do a partial inversion in the form of a similar pose. For example, an alternative to Headstand is to do a Standing Forward Bend with your head on a block (or two) or with your head and arms on a chair or to do Widespread Standing Forward Bend with head support. I did both of those when I had a frozen shoulder. 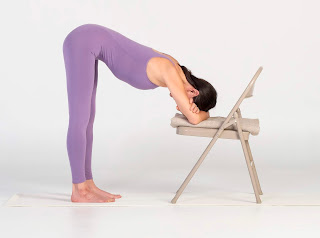 Instead of practicing Shoulderstand, you could do a supported Bridge pose, which is a much more gradual inversion that puts much less weight on your neck.

You can also try the pose right side up, such as Handstand with your feet on the floor and your hands in the air, as if they were touching the ceiling. I’ve seen fellow students doing that in class.

I hope you find these strategies useful and inspiring! If you create a new variation of a pose that you like, send us a photo—we’d love to see what you’ve come up with.

This post was edited by Patrice Priya Wagner, Managing Editor of Accessible Yoga blog and member of the Board of Directors