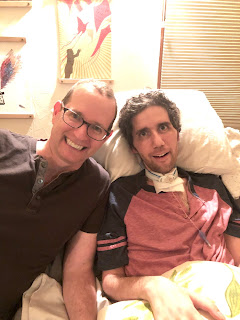 A few weeks ago, a friend introduced me via email to Ady Barkan, the well-known progressive activist, who happens to live in the same town I do. I was thrilled to meet Ady because I’ve been following his work for a long time. He is an incredible activist who has put his body on the line numerous times protesting for universal healthcare and increased rights for people with disabilities.

Ady is in his early 30s and has advanced ALS (amyotrophic lateral sclerosis), so his body is mostly paralyzed. You can read about his amazing journey in his new autobiography, Eyes to the Wind: a Memoir of Love and Death, Hope and Resistance, which I highly recommend. He was also profiled in the New York Times a few months ago, and recently interviewed all the major Democratic candidates regarding their positions on universal healthcare. I strongly suggest watching these powerful interviews, which CNN predicts will have a influential impact on the current election.

I offered to come to his house to share a yoga session with him, and he accepted. He said that he had tried to do some meditation when he was first diagnosed, but it was challenging, and that he was interested in yoga. I hadn’t met him in person, so I wasn’t sure what practices would be most helpful, but I planned to do some gentle asana, breathing practices, relaxation, and meditation.

When I arrived and met Ady in person, I saw that he had almost no mobility and was using a ventilator to assist his breathing. Ady had an aide with him, and he wanted to show me the daily stretches that they did together. So I watched as Ady allowed his aide to move and stretch his body with great care and sensitivity. I was struck by the connection they shared and how the two of them had found ways to communicate beyond words.

To speak, Ady uses an iPad and selects letters on the keyboard with his eyes to spell out words, which the computer than verbalizes. This is a slow and tiring process for him, so I saw that I needed to have patience and be careful to only ask pertinent questions that wouldn’t force him to talk too much.

When Ady and his aide were done stretching, I noticed that Ady was slouching in bed, and I thought that rather than doing poses with him, we could work on supporting his posture. In particular, I wanted to see if he could expand his chest so he had more space for his lungs to move freely. My idea was to put a pillow behind his back for lumbar support, which in turn would create expansion in his chest. But I wasn’t aware of the challenge involved in doing this.

Ady’s aide explained to me that we would have to lower the head of the bed, help Ady roll to his side, place the pillow behind his back, help roll him onto his back, and then raise the bed again. He didn’t mention that the reason Ady was always sitting upright was because he couldn’t consciously engage his throat muscles to swallow. So we lowered the head of the bed and quickly Ady start choking on his saliva. We managed to get the pillow behind his back and sit him back up, but I apologized profusely and felt terrible that I had almost killed him with yoga!

Ady said that he was fine and that he liked the feeling of the pillow behind his back. So then, with permission, I placed another pillow on his lap and folded his hands together on the pillow in a gentle mudra where they were resting on top of each other. He said that felt comfortable too.

Then I asked Ady to bring awareness to his breath, but the speed of the ventilator was surprisingly fast and he couldn’t control the speed. So the traditional instruction of slowing the breath wasn’t useful. Instead, I asked him to listen to the sound of the ventilator and become more conscious of the breath. We tried to hear the mantra “So-Hum” in the ventilator—listening for the “so” on the inhale and the “hum” on the exhale. Then we moved on to a body scan, bringing awareness to different parts of the body in a nonjudgmental way.

We ended with a meditation on the mantra Om Shanti. This mantra is beautiful because it means peace beyond understanding. I repeated it out loud for us both to follow and then moved into silence asking him to keep repeating the sound internally. I could feel his tremendous focus during the meditation, and was amazed by his presence and the power of his mind.

Finally, I ended the session with a short closing chant. He perked up at this point and asked me to chant some more. So I repeated a famous prayer, which he seemed to enjoy more than any of the things we did together. I also translated it for him into English:

After my session with Ady, I was reminded of the power of yoga to support anybody in calming the mind and connecting with something deeper. Ady’s presence and power also represent the underlying truth of yoga, that we are not just the body and mind. This underlying truth, which we call spirit, god, or consciousness, is behind all the busy-ness and activity of our lives. Yoga offers such practical tools for all of us to connect to this place, regardless of our physical ability. Thank you, Ady for showing me, once again, the power of the yoga.