A Very Brief History of Yoga 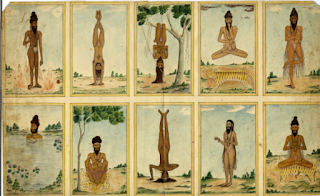 I believe that everyone who practices yoga should know a little about yoga history. My reason for feeling this way is because I’ve come to learn that there are many myths about yoga that get passed on from teacher to student and then to those student’s students and so on. These include myths such as that yoga is over 5,000 years old, that the Ashtanga primary series was discovered in an ancient manuscript, and that the Yoga Nidra relaxation technique practiced in modern times is an ancient practice that was passed down to us intact.

In general, this whole habit of believing concepts and practices are ancient and, therefore, perfect can lead to a lack of questioning, which is never a good thing. And while some of these myths may have arisen from lack of understanding (the fact that there was an ancient term “yoga nidra” could have led people to become confused about how that term related to the modern Yoga Nidra practice), in other cases, some were intentionally fostered to make a practice appear more "legitimate" and possibly less open for debate. But more importantly the truth matters. In this era of “alternative facts,” I think it’s important not contribute to misinformation about yoga if we can avoid it.

Unfortunately, educating yourself about yoga history can feel like a daunting task. Some of the best books on the topic, such as The Yoga Tradition by Georg Feuerstein, are brilliant but challenging to read. I know because I have read them. So that’s why I was very excited to find a paper by Sean Feit Oakes, PhD called A Timeline of Yoga History with Primary Texts, which is short (22 pages), recently updated (2017), and quite accessible. It is a PDF that you can read online or download here.

To make Sean Oakes’ history of yoga even more accessible to you, I put together a little timeline that summarizes this paper so you can get the feeling of the basic flow of yoga history as he portrays it. (I should say, however, there is some debate about the dates for the early yoga documents included here because they’ve been passed down orally and there is no precise way to date them. For example, I’ve commonly seen other dates indicating that the Bhagavad Gita is a couple of hundred years older than the Yoga Sutras.)

The early Upanisads are the first texts that reference yoga and describe yoga practices. About this yoga, Oakes says, “The path of yoga was to seek the end of suffering through discovering the true nature of the self.”

Specifically, the Katha Upanisad contains the first known references to yoga and yoga practices. Oakes says that the Katha Upanisad “refers to pratyāhāra, or withdrawal of the practitioner’s attention from the objects of the physical senses” and that this practice “would become the basis of the central yogic practice of meditation.”

I’ll add that the other Upanisads composed during this era define yoga as it was practiced before Buddhism. We don’t see yoga asanas (poses) during this period other than those seated poses used for meditation.

Because the Buddha was taught meditation and philosophy by two yoga teachers before he became enlightened, he is considered by many yoga scholars to be an influential yoga teacher himself.

Oakes says, “The Buddha taught a detailed yoga based on cultivating focused attention (samadhi) and mindfulness rooted in ethical action and embodied inquiry.”

Of the Yoga Sutras, Oakes says, “Patañjali’s yoga, like the Buddha’s, is meditative, focusing on cultivating states of profound unification of mind (samadhi, or samyama: the combination of the last three limbs of dharana, dhyana, and samadhi) in postures of physical and mental stillness.”

I’ll add that even though this text contains a branch called “asana,” scholars agree that back then the asanas were seated poses used for meditation.

I also want to mention that this is the yoga text that in the West is now considered by many to be the most important book on yoga. However, this was not necessarily true in India during the time it was composed. In fact, I recently read that until the 13th century, the Yoga Yajnavalkya was considered the most important yoga text. Oakes explains how this text became popular in the West in the 20th century:

“Western yoga’s embrace of the Yoga-Sūtra is rooted in Krishnamacharya’s veneration of it, along with Swami Vivekananda’s, who published the first wide-spread English translation as Raja Yoga in 1896.”

Oakes says that this is “perhaps India’s most beloved spiritual text” and describes the yoga defined here as “the pathway by which one is liberated from karma and the round of endless birth (saṃsāra).”

Currently in the West the Bhagavad Gita is considered one of the most important texts on yoga, thought it has a different path and orientation than the Yoga Sutras. Oakes says:

“Seen as describing a single broad yogic path, the Bhagavad Gītā taught a yoga oriented to householders that emphasized fulfilling one’s caste duties and cultivating the discipline of vairagya, renunciation of the fruits of action, or Karma Yoga.”

This is when we see yogis doing physical practices that work with nadis, cakras, the sakti, and so on. (The asanas come next.)

Oakes says that that Haṭha Yoga “arose in the 13th century as a simplification of Śaiva Tantra, omitting ritual, mantra, and guru, but retaining and developing the physical and energetic practices.”

The physical practices he mentions include yoga poses (asanas), which were intended to purify and strengthen the body, including a few that we still do now. Oakes says:

“The practices of early Haṭha Yoga are the most immediate historical root of Modern Postural Yoga (MPY), emphasizing the use of poses and breath work leading to states of physical and energetic mastery.”

Because the type of yoga most of us practice in the 21st century, especially in the West, has such an emphasis on yoga asanas (yoga poses), this type of yoga is now commonly referred to as “Modern Postural Yoga” by yoga scholars. Of this type of yoga, Oakes says:

“Haṭha Yoga was revived in the early 20th century, and took root in two primary lineages, one “southern”, via Sri T. Krishnamacharya of Mysore, and one “northern”, via Swami Śivananda of Rishikesh.”

“In both lineages, āsana was emphasized (more in Mysore than Rishikesh) and expanded, adapting exercises from European calisthenics and contortion. Krishnamacarya’s religious affiliation was Vaiśnava, and his teaching focused heavily on the philosophy of Patañjali’s Yoga-Sūtra, Śivananda, the guru of well-known teachers Satchidananda (founder of Integral Yoga) and Satyananda (founder of Bihar Yoga), was Śaiva, brought more bhakti (and mainstream Hindu) philosophy to the practice, and sourced his teachings from Vedānta, the Gītā, and both Classical and Tantric yogas."

Oakes' paper includes more details about how the asana practice changed during this period. And if you’re really interested in this history, you can read The Yoga Body by Mark Singleton.

This post was edited by Patrice Priya Wagner, Managing Editor of Accessible Yoga blog and member of the Board of Directors