Overlooked No More: Gargi, Legendary Yogini of the Yoga Yajnavalkya 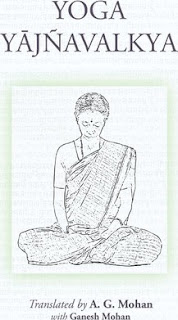 “In the assembly of great sages, the wife of Yajnavalkya, known as Gargi, endowed with unparalleled qualities, seeking the highest truth, prostrated and spoke as follows.

"Gargi said, ‘Revered one, who has studied and realized the essence of the sastras, and is concerned with the welfare of all beings, please teach me the essence of yoga with all its branches and sub-branches.’” —Yoga Yajnavalkya, Chapter 1, 6-8, translated by A.G. Mohan

In the Yoga Yajnavalkya, Gargi, a woman married to the sage Yajnavalkya, is herself a serious student of yoga. And almost the entire text of the Yoga Yajnavalkya consists of questions that Gargi asks of Yajnavalkya and his replies to her. The text makes it clear there are a number of other sages present during this dialog, but we can’t say for sure there are other women among them. However we do know that Yajnavalkya gives a few specific recommendations for women (what kind of pranayama they should practice and what they should meditate on). This indicates it was not unusual for women to be practitioners of this type of yoga (an eight-fold path similar to the one in the Yoga Sutras, though with a few significant differences).

At the end of the Yoga Yajnavalkya, Gargi is satisfied she now has the understanding of yoga that she has been seeking and she retreats alone to the forest to pursue her practice, achieving there the enlightenment that the text defines as “the union of the individual self (jivatma) with the supreme self (divine or paramatma)."

“Then, in solitude, having clearly understood yoga which is born in solitude, and is the cause of freedom for all beings, having given up worldly bondage, [Gargi] entered a solitary place in the forest with complete happiness.

"[Thus] she remained, always seeing (meditating on) in the crown of the head and in the heart, that Vasudeva (the Divine), spoken of by the Vedas, by who the entire world is complete and radiant.” Chapter 12, 44-45, translated by A.G. Mohan

Although it is difficult to determine how old this text is, the translator is of the opinion that it was completed before the 4th century CE. Certainly some of the Yoga Upanishads and the Hatha Yoga Pradipika reference it, so it is well established as a fairly ancient yoga text and was quite well known before the 13th century. In the early 20th century, T.K.V. Krishnamacharya considered this a very important text, which is why both he and his student A.G. Mohan translated it into English.

Whether or not Gargi was a real person is impossible to know, but regardless I think that the fact that she is the “heroine” of an important yoga text, that her teacher encourages women as well as men to practice yoga, and that the text shows that women as well as men are able to achieve enlightenment, indicates that at least in certain yoga schools, it was not unusual for women to be serious practitioners of yoga. When many of us start studying yoga history, we're a bit upset to see that virtually no women are ever mentioned. So I was quite excited to discover the existence of this particular text and wanted to share what I learned with you all.

This is the first in what I hope will be an ongoing series about women in historical yoga. I was inspired to start this series by the ongoing New York Times series of the same name, "Overlooked No More," which both fascinates and appalls me. It contains newly written obituaries that are about important women the New York Times neglected to recognize in the past due to the fact that a very high percentage of their obituaries were focused only on men.

If you would like to write a post yourself for this series on women in historical yoga or nominate a particular historical figure, just let me know!

This post was edited by Patrice Priya Wagner, Managing Editor of Accessible Yoga blog and member of the Board of Directors.