Disability Rights in a Pandemic: Discussion with Ryan McGraw

In this Accessible Yoga Community Conversation, Jivana Heyman speaks with disability activist, Ryan McGraw. Ryan discusses his advocacy work and "Disability Rights in a Pandemic." In particular, Ryan explains the challenges facing people living in nursing homes with little access to communication with the outside world. 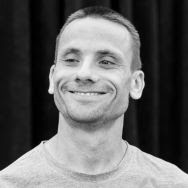 Ryan McGraw approaches every class with the belief that everyone can do yoga. As a person with cerebral palsy who has been practicing yoga for 15 years, Ryan is well aware that yoga poses can be adapted to meet the needs of the student, no matter what their ability level is.
Ryan earned his 200-hour yoga teaching certificate from Prairie Yoga in 2011 and completed two adaptive yoga teacher training with Matthew Sanford. Ryan received his Master’s Degree in Disability and Development from the University of Illinois at Chicago, in 2013. For his Master’s Thesis, Ryan created an adapted yoga manual for people with disabilities. He continues his studies in accessible yoga with Gabriel Halpern in Chicago.

Ryan was featured in a US News and World Report article on adaptive yoga. He has written about his yoga experience in Yoga and Body Image, a collection of essays from people who are not the average yoga practitioner.

° DONATE here to help us bring yoga to people who don't have access or have been underserved, such as people with disabilities, chronic illnesses, children with special needs, and anyone who doesn't feel comfortable in a regular yoga class.
Posted by Nina Zolotow at 6:00 AM