Overlooked No More: Maitreyi of the Brihadaranyaka Upanishad

by Anjali Kamath Rao
“If I could get all the wealth in the world, would it help me to go beyond death? Of what use then are money and material possessions?  Please tell me, of the way that leads to immortality.” —Maitreyi, Brihadaranyaka Upanishad
In the Brihadaranyaka Upanishad, the great sage Yajnavalka turns to his favorite wife, Maitreyi, and says, “I have completed my responsibilities as a householder, it’s time for me to leave to be a sanyasi (renunciant), but before that, I would like to divide my property between you and Katyayini, your sister-wife.” Maitreyi (The Friendly One) then asks the above question of her beloved husband, Yajnavalka, and their ensuing dialogue is the basis of the oldest and one of the principal Upanishads, the Brihadaranyaka Upanishad (Brihad meaning “vast” and Aranyaka meaning “of the forest”). Maitreyi is known as Brahmavadini, the expounder of the Vedas, who composed hymns and who was one of the few women philosophers that may have lived around 8th Century B.C.E. in Mithila (modern Bihar India).
Yajnavalka, as was common during those times, was a married Vedic rishi or sage with two wives, Katyayini, who managed the ashram, and Maitreyi, a scholar whose interests ranged from philosophy to metaphysics. In India, as a tenacious seeker of truths, Maitreyi is one of the icons of women in intellectual pursuit and higher education. In this Upanishad, she asks the leading questions, listens to her husband’s answers, and then when she is confused by his esoteric or vague replies, she asks again for clarifications, showing that she is truly wanting to learn rather than just to please her husband. She then follows him in his path, becoming a sanyasin herself with a disregard for material possession and worldly pleasures.
Maitreyi and Yajnavalkya talk of many things in the Brihadaranyaka Upanishad. They talk of the nature of love, saying that we love our children, our partners, our universe, and all of creation because we recognize our true Self in all. In other words, we truly love when we come to realize that we are all one. Separation is illusion or maya. Regarding the Oneness of All Things, the basis for Advaita philosophy, Yajnavalka says to Maitreyi:
“As a lump of salt thrown in water dissolves and cannot be taken out again, though wherever we taste the water it is salty, even so the separate self dissolves, in the sea of pure consciousness.”
Maitreyi, ever curious, asks him what happens after death. Yajnavalka then proceeds to talk about consciousness and different layers of consciousness. He also talks of a debate with another woman philosopher of their times, Gargi, who he claims he defeated in a debate. (Another variation is that Gargi continued to challenge him and he got so annoyed at this that he yelled at her, “May your head roll if you ask another question!”)
Maitreyi, even though conventional in her role as a wife and in many ways a student of her husband, is very relatable. She is inquisitive and steadfast in her wanting to learn. She is a good student, disciplined and respectful, yet questioning authority when there is ambiguity. She knows her mind, knows what she wants to know and rejects what is easy and available, the material world. That’s what I like about her. She persists. 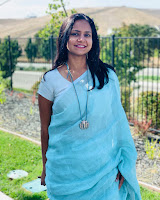 Anjali Rao (RYT-500) teaches Yoga Basics at the Stanford Cancer Care Program and Washington Hospital. She is a part of the teacher training faculty in studios around the Bay Area. Her focus is Yoga philosophy and history, and her passion is to make the practice of Yoga on and off the mat accessible, helpful, and joyful to people across ages, genders, and abilities. She serves on the Board for HERS Breast Cancer Foundation, a non-profit that helps survivors and those going through treatment regardless of financial status. She is a lifelong student of Indian Classical Dance, is a sucker for puppies, and loves dark chocolate, the ocean, and old trees.

This post was edited by Nina Zolotow, Editor in Chief of the Accessible Yoga blog and co-author of Yoga for Healthy Aging: A Guide to Lifelong Well-Being.